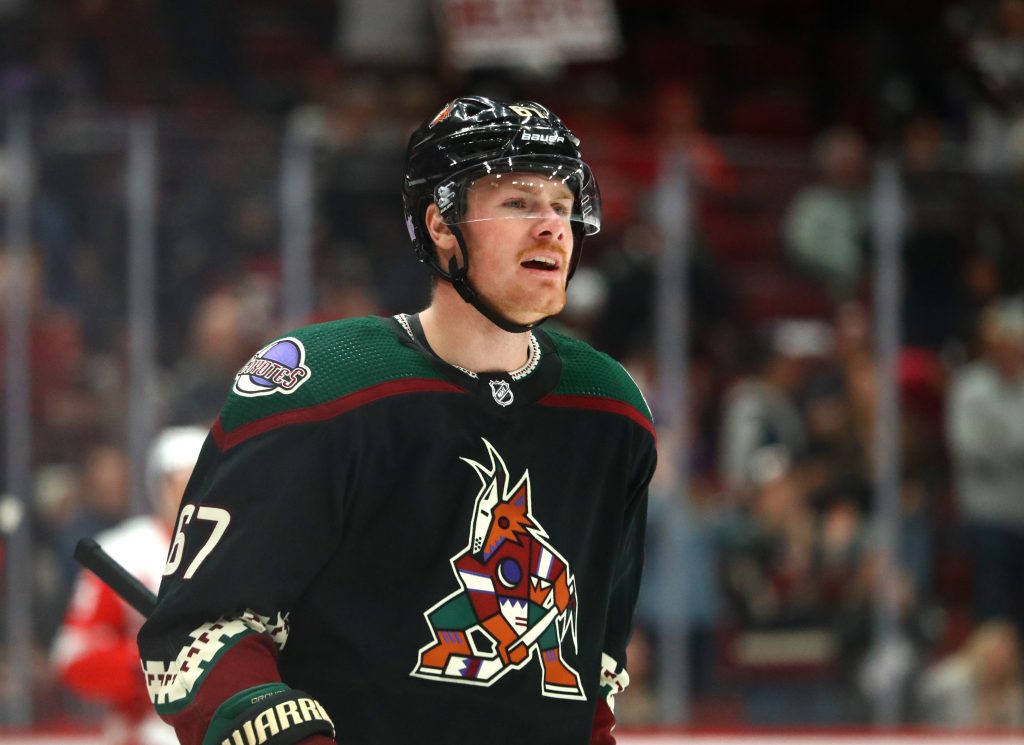 The offseason is here for half of the league’s teams that aren’t playoff-bound. It’s time to consider what they will need to accomplish over the next few months. The next step is a look at Arizona.

This season has gone more or less as expected for the Coyotes. After blowing up their roster over the summer and cementing their status as a team committed to a long-term rebuild, expectations were low heading into the year and they delivered, finishing last in the Western Conference. Their direction seems unlikely to change (beyond playing out of a college arena for next season) and their checklist reflects that accordingly.

One of the positives of this season was the unexpected appearance of Karel Vejmelka between the pipes. Originally seen as extra depth, he worked his way up the opening roster and things only got better from there. It earned him a three-year contract extension at the trade deadline and secured part of their goaltending tandem for the next few years.

The other half of this pairing, however, remains a work in progress. Ivan Prosvetov struggled in his limited duty in the NHL, Josef Korenar had a particularly difficult season in the minors, and asks for a waiver Harri Sateri only had a 0.866 SV% in his six appearances in the streak. Suffice it to say, the perfect partner for Vejmelka is not currently in the organization.

The team can take two paths to fill this spot. They may consider adding a veteran free agent, which they did this year when they signed Carter Huton although aiming a bit higher this time around would make sense. There are several veteran netminders available once again and adding one on a short term contract would solve the short term problem and is a perfectly reasonable solution. But how attractive will the team be with the direction it’s headed and the fact that it won’t be playing at an NHL-sized facility for some time?

On the other hand, as a team that has shown a willingness to accept unwanted contracts, this must also be an avenue to explore. There are higher-priced starters with deals their teams wouldn’t hesitate to walk away from and it stands to reason that they could add draft picks or prospects as compensation for taking the contract out of their hands. This could lead to some longer term stability to the position with additional future assets as well.

Last summer, it was expected that the defender Jakob Chychrun was going to be moving, but it never materialized. Then, during the season, reports surfaced that he was available but the asking price was quite high, with those reports listing the price as at least three or more first-round items. He then suffered an ankle injury about a week and a half before the trade deadline, which ended any thoughts he might be moved.

But now it’s the offseason where it’s easier to trade players with time remaining on their contracts and Chychrun still has three years left on his contract with a $4.6 million AAV. General manager Bill Armstrong said at the end of the season that a trade involving his top defenseman was something they would explore, which will only add fuel to the fire.

However, beyond the summer often giving more flexibility in roster building, the same issues that existed during the season are still there now. The asking price is almost certain to remain extremely high and while there has been speculation that there are teams ready to meet it, the fact that a trade hasn’t taken place either means it doesn’t. was not the case, either that the price rose even more.

The other is that Chychrun isn’t exactly coming off a good season. Few Coyotes have had good years in 2021-22, but the 24-year-old has taken a step back despite still managing to put up 21 points in 47 games. There’s certainly a good enough record to indicate he can get back to form, but getting back to that form in an Arizona uniform would strengthen their bargaining position.

As a result, their biggest decision of the summer is deciding Chychrun’s future. Do they take the best deal they can get for him now or roll the dice and see if he can work his way up to increased business value? At this point, a trade is probably the best decision for everyone involved.

A Coyote who had a good season was the winger Lawson Crouse. The 2015 first-round pick played an increased role under head coach André Tourigny and responded with career highs in goals (20) and points (34) despite missing 17 games due to of an injury. He also contributed physically with almost 2.8 hits per game. It’s been a great year of platforming ahead of his first year of refereeing eligibility as a free agent with compensation.

The 24-year-old still has two years of RFA eligibility as he failed to reach the 40-game mark in his second professional season in 2016-17, which prevented him from accumulating a year on the seven needed to achieve UFA status. . A power forward at the peak of his career with a few years of team control remaining – that’s the definition of a key part of Arizona’s future plan…or a key trade chip.

The market rate in terms of salary for a base forward is still quite expensive and it’s likely Crouse’s camp will look into Josh Anderson(seven years, $5.5 million AAV) as a comparable in all long-term discussions. Is this a price Arizona will want to pay? That’s certainly steep considering his track record, but at the same time he’s young enough to still be part of the core when they finally emerge from their rebuild.

Or should they cash in when its trade value is likely at its highest? Is there a team ready to part ways with a high-quality prospect to get a young power forward? There probably are. Although they would run the risk of moving it a little too soon (another year like this in 2022-23 would only increase its business value), it would ensure that they would get a solid return and an asset that could line closer to their young nucleus.

While Chychrun will dominate the discussion surrounding the Coyotes for the next few moments, deciding what to do with Crouse will be a big part of Arizona’s offseason.

There will come a time when the Coyotes will have too many choices and prospects; they are already eyeing the draft class of 2024 with some of their moves. However, they are not there yet. What should all reconstruction teams do? Stock young assets.

Arizona is starting to run out of important trade chips, especially if Chychrun and Crouse are moved. However, they can still take advantage of their ceiling space. We saw them accept unwanted contracts several times last summer and even got a quality piece in Shayne Gostisbehere which could be a trade chip closer to the trade deadline of 2023. They have taken contracts in the past for players on LTIR and recently did so with Bryan Small. They can always afford to do this to add more picks and prospects and with some uncertainty about the level of attractiveness as a free agent with their arena and competitive situation, it would definitely help them fill out their roster for next season.

Eventually, some of their choices and perspectives will need to be consolidated to help them take a few steps forward. Until then, when it comes to future assets, the more the better.