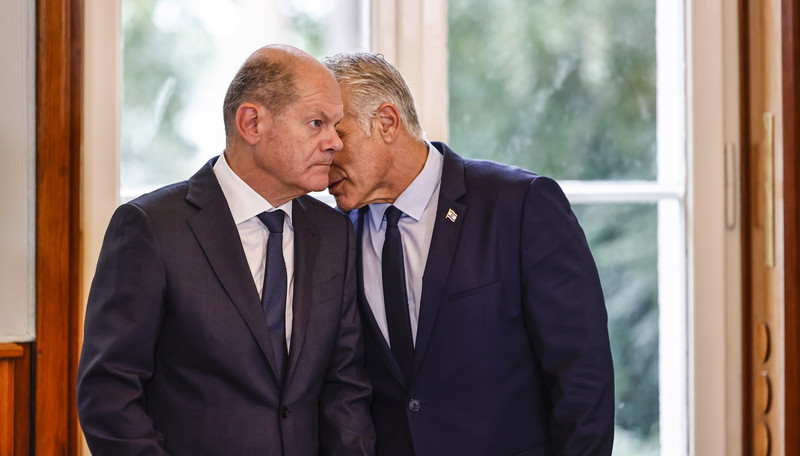 A Jewish group in Germany has filed criminal charges against Israeli Prime Minister Yair Lapid and Defense Minister Benny Gantz for the bombing they ordered in Gaza this summer.

The surprise Israeli attack from August 5 to 8 killed around fifty Palestinians, including 17 children. At least 360 people were injured.

“This was an alleged pre-emptive strike that was carried out without any concrete threat,” the Jewish Voice for a Just Peace in the Middle East said on Sunday.

“In public, this excessive attack was widely described as self-defense against Palestinian Islamic Jihad, which in fact only fired rockets in response to Israeli shelling,” the group added. “But even if it did, nothing would justify such a scale of civilian suffering and destruction.”

“Israel, thanks to international – including German – complicity has the most modern weapons technology and is of course capable of carrying out precise attacks,” Jewish Voice said.

“When so many civilian casualties are accepted in order to eliminate a few combatants, the end result is deliberate massacres.”

By filing a lawsuit against Lapid and Gantz in Germany’s Federal Court of Justice, the group is seeking “consequences for the two men who are responsible for this suffering above all”.

The criminal complaint, a copy of which was seen by The Electronic Intifada, charges the two men with crimes against humanity and war crimes for their role in the attack on Gaza.

The charges were timed to coincide with a two-day visit to Germany by Lapid to promote the arms trade between Berlin and Tel Aviv.

Lapid, whose brutal anti-Palestinian policies are indistinguishable from those of opposition leader and former prime minister Benjamin Netanyahu, is nonetheless favored by European leaders and often falsely portrayed in Western media as “centrist” and “moderate.” “.

As for Gantz, this is not the first attempt to bring him to justice in a European or international court.

Israel’s defense minister is likely the target of an ongoing International Criminal Court investigation, though that process appears to have slowed to a snail’s pace — if progressing at all — under the watch of the new prosecutor in leader, Karim Khan.

Khan seems more determined to appease Western ICC paymasters as they try to turn the tribunal into a political weapon in their geopolitical war on Russia, rather than a forum for victims who have no other recourse. to obtain impartial justice.

Since 2018, Ismail Ziada, a Palestinian-Dutch citizen, has been suing Gantz in the Netherlands for a 2014 bombing in Gaza that killed Ziada’s mother, three brothers, a sister-in-law and a 12-year-old nephew. thus as the seventh person visiting the family.

Judges have so far blocked Ziada’s pursuit of justice, on the grounds that foreign officials cannot be sued in civil cases in Dutch courts. This case is on appeal.

Gantz, who was army chief at the time of the 2014 assault, later boasted during an election campaign that he had bombed Gaza in “the stone age”.

But even European countries that recognize universal jurisdiction over war crimes and crimes against humanity have bent over backwards to protect accused Israeli war criminals.

In 2002, Belgian courts halted an attempt to bring Ariel Sharon to justice for the Sabra and Shatila massacres of Palestinian refugees, whom he oversaw as defense minister during Israel’s invasion of Lebanon there. 40 years old this week.

The following year, just months after the illegal US-led invasion of Iraq, Belgium repealed its Universal Jurisdiction Law under intense US pressure, protecting American, British, Israeli and Western leaders. efforts to hold them accountable for their crimes.

While regularly escaping arrest, Livni even received a “Peace Prize” in Germany in 2020.

Unfortunately, the chances of justice being served in the country whose government murdered millions of Jews during World War II are slim.

Prosecutors in Germany – where former members of Hitler’s Nazi Party dominated the Justice Ministry until the 1970s – have made it clear that they are fine with Israel killing Palestinians and even German citizens.

Despite a German law requiring them to do so, federal prosecutors have refused to open an investigation into Israel’s July 2014 killing of Ibrahim Kilani, a German citizen, his wife and their German-born children. .

Germany’s warped and deeply hypocritical political culture views unconditional support for Israel’s crimes against the Palestinian people and the theft of their land as a form of “atonement” for the Holocaust, as if Israel – which did not exist in the time – and not the European Jews, were Hitler’s victims.

For Nazis past and present, showering praise and support for Israel is a sort of “no jail” card that can be used as a shield against any accusations of anti-Jewish bigotry.

The Palestinians are the metaphorical and real sacrificial scapegoats.

Journalists were fired from their jobs based on false allegations of anti-Semitism because of their criticism of Israel.

Nevertheless, in keeping with the ideological rigor imposed in Germany, Deutsche Welle this month adopted a new code of conduct obliging all employees to support Israel’s “right to exist”.

But Jewish Voice for a Just Peace in the Middle East is determined to challenge this perverse status quo.

“As a Jewish organization, we stand for universal human rights,” the group said. “Like many Jewish organizations around the world, we insist that Israel does not represent Jews or speak on our behalf. Israel must be held responsible for war crimes like any other state.