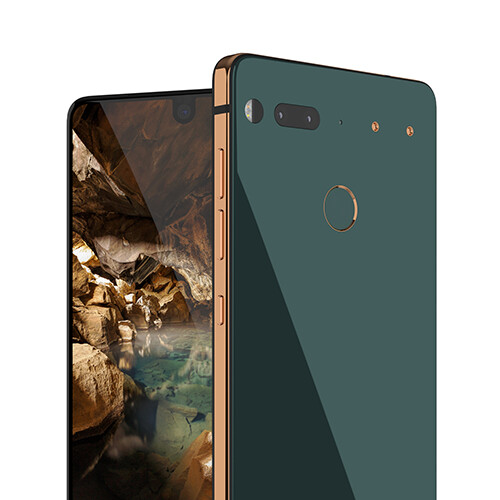 People argued a lot about whether the Essential Phone’s screen cutout is ugly or not – so much so that they missed another more important question: what impact will it have on the user interface? Having a big hole at the top of your screen certainly doesn’t seem like the best idea, however, the device seems to compensate for this by making the status bar taller.

And all that is well and good: actual images seem to indicate that it won’t be such a big deal, thanks in large part to the screen’s high aspect ratio. However, potential Essential Phone buyers beware: screenshots of your device are going to be pretty one ugly. Take a look at the one on the right, shared by Essential’s sales manager on Twitter. It seems that when there’s no cutout present, the ultra-high status (160 pixels tall!) becomes a bit of a pain to watch. Is that why did the company’s head of user experience call him?
But we can notice a few other interesting things: the home button, for example, has a second ring around it, which reminds us a bit of the Google Pixel. This wouldn’t normally be a big deal, but when you remember that the device is set to launch with a new virtual assistant built into the operating system, it looks like Essential will be replacing the Google Assistant with its own alternative.
Also, the screenshot in the image format of the Twitter post is noticeably off (though we’ve fixed it in the version embedded in this post). This could, in theory, be a Twitter bug, but we’re more inclined to believe the phone itself is causing the problem: after all, devices don’t receive inexplicably delayed for several months if there are no problems to be resolved at the last moment.
status bar
Share FacebookTwitterGoogle+ReddItWhatsAppPinterestEmail