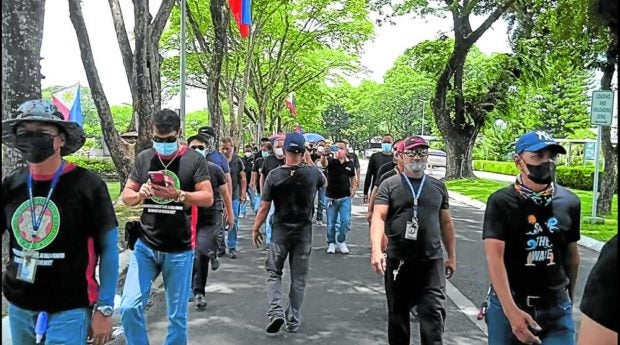 CITY OF SAN FERNANDO—The union of about 500 rank-and-file workers at Clark Development Corp. (CDC) filed a strike notice with the National Conciliation and Mediation Board (NCMB), which state labor ombudsmen began hearing on Wednesday.

According to the Association of CDC Concerned Employees (Acces), they filed the strike notice outside the NCMB regional office in central Luzon on June 30 due to alleged flagrant violations of their collective bargaining agreement (CBA), in particular the reduction in salaries and Allowances, Benefits and Incentives (ABI) as a result of the implementation of the new Compensation and Job Classification System (CPCS) in the Crown corporation.

The issue centered on the CPCS created by the GOCC Governance Commission (GCG) for the CDC workforce, directing the base conversion body to implement the new pay structure in June this year . The CDC is the state agency overseeing the conversion of Clark into an economic center from a former military base leased by the 13th U.S. Air Force until 1991.

The workers protested against the CPCS because it would no longer recognize the benefits due to employees under their collective agreement.

With the CPCS, some 685 employees stand to lose between 4,000 and 8,000 pesos a month in ABI, which they earned through the ABC, CDC Chairman Manuel Gaerlan said.

Under Section 2 of former President Rodrigo Duterte’s Executive Order No. 150, all state-owned and controlled corporations (GOCCs) like CDC no longer have the authority to negotiate a CBA or collective bargaining agreement. (CNA) with their workers.

The section stated that while it recognized “the constitutional rights of workers to self-organization, collective bargaining and negotiations, the board of directors of all covered GOCCs shall not negotiate the economic terms of CNAs. /CBA with their officers and employees”.

At the July 13 hearing, the union and management agreed to a status quo on wages and the ABI, according to the minutes of the NCMB meeting.

A stalemate on four unresolved issues would prompt the union to vote on whether to call a strike, Acces President Edsel Manalili told The Inquirer in a telephone interview Thursday. In a July 4 plea, the CDC asked the GCG to review and correct the CPCS. , saying it was “unfair” and “demoralized the employees”.

The CDC Board of Directors, led by Chairman Edgardo Pamintuan, also approved management’s authority to defer the implementation of CPCS and maintain the status quo on monthly base salary and ABI.

According to the CDC, the CPCS “would result in a large disparity in wages among employees and a decrease in take-home pay.” The wage reduction amounted to 30% for basic workers.

“The removal of ABIs not included in the CPCS may also be construed as a violation of the ABCs executed by and between the CDC and its supervisors and core employees, respectively,” he said.

The labor agreements were enforced before Republic Act No. 10149, or the GOCC Governance Act of 2011, became law, he added.

The CDC asked the GCG to consider the agency’s financial contribution to the correction of the CPCS.

The CDC pointed out that it did not receive national or local funding, but paid 1.13 billion pesos to national coffers in 2019. CDC employees served 1,200 locators and their more than 120 000 workers during the pandemic. —TONETTE OREJAS